IN THE IMAGE OF GOD

In The Image of God

So, who is this God that people fight and kill for? Were commands ever given by this God to execute the carnage that recorded history reports? Certainly not. And I am about to explain why. Consider the following ...

Quite simply, what is called God; is the entire Universe and everything contained WITHIN this Universe, existing in the form of pure Energy; conscious, intelligent Energy in which we "live and move and have our Being (Acts 17:28 NT)." Therefore, we live in the presence of God whether chosen, or not.

At the very centre of this Divine Energy, is The SOURCE of this Energy who billions refer to as "God". This Divine Energy vibrates at ever decreasing frequencies the further outwards from The Source, until finally, at the outermost limits of The Universe, and furthest from The Source Energy is the manifestation of God with the lowest frequency, highest density of all, the physical Universe of "matter" which is familiar to all of us.

Albert Einstein proved that all is energy. Modern Science (Science means: "Proof knowledge") and Quantum Physics continue to prove what the Ancients KNEW so very long ago.

"And so, having studied the atom, I am telling you that there is no matter as such. All matter arises and persists only due to a force that causes the atomic particles to vibrate, holding them together in the tiniest of solar systems, the atom."

The physical world of matter (matter - mater - Latin for Mother - the Divine Feminine) exists at a low vibration and high density by comparison to the Universe as a Whole. Yet, it is all vibrating frequency and Energy. It is true that we are made in the Image of God, but not the personified image, not the deity in human form of the dogmatic religions, but rather we are "made", or thought into existence in the Spiritual image of God. What is God (Father - Divine masculine) then, is pure Energy ... and so too are we as human beings pure Energy made in the "imagination" or image of God (mind / mental), and we are always in the eternal presence of God, Who lives IN us, THROUGH us, and AS us. THIS, is the Divine Spark ... The offspring ... The CHRIST.

Image: Helix Nebula (The Eye of God) from the Aquarius Constellation. 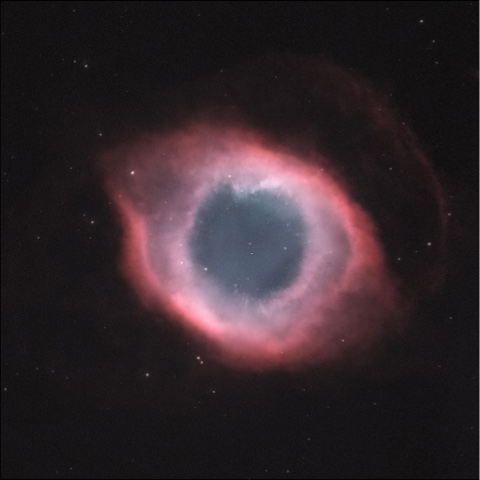