A miracle is generally defined, according to the etymology of the word - it comes from the Greek “thaumasion” and the Latin “miraculum” - as "that which causes wonder and astonishment, being extraordinary in itself and amazing or inexplicable by normal standards."

Because that which is normal and usual is also considered to be “natural,” miracles have occasionally been defined as “SUPER-natural” events, but this definition pre-supposes a very specific conception of nature and natural laws and cannot, therefore, be generally applied.

The significance of a miraculous event is frequently held to reside not in the event as such but in the reality to which it points - thus, a miracle is also called a sign - from the Greek “sēmeion” signifying and indicating something "beyond itself."

Extraordinary and astonishing occurrences become specifically religious phenomena when they express, reveal, or signify a religious reality, however defined. Belief in miraculous happenings is a feature of practically all religions, and the incidence of miracles (i.e., of belief in and reports regarding miracles) is universal, though their functions, nature, purpose, and explanations vary with the social and cultural ... including theological and philosophical context in which they appear.

However unable to be explained, all “miracles” have an explanation in the sense that they are accounted for and categorized in terms of the religious and cultural system that supports them and that, in turn, they are meant to support.

Without the intervention or consideration of religious catalysts, these “miracles” are but only unexplained phenomena. Or are they? Anything that is able to happen, and does … is obviously natural in that it was able to occur in the first place. Using the list of Immutable Universal Laws, there can be no way of transgressing or transcending these laws because they are immutable. For example, for every effect, there must be a cause. Period. No other way around it. This is LAW.

When we speak of “supernatural” events or miracles, we frequently take them out of context. For example, we say “it’s a miracle that Bob survived that car accident.” Why is it a miracle? Why would it have to be “supernatural?” - astonishing and extraordinary perhaps (which is the original meaning of miracle) - but why must it be “supernatural?” We humans short-change ourselves in the department of “natural” ability and phenomena. If we have accomplished it, of we are capable of a task, if we completed a project, then “naturally” … it can be done.

Back to Bob … expertly trained first responders and medical personnel did what was necessary to save his life. Therefore, his survival was a natural occurrence … not miraculous. Unless, we go back to the original meaning of the word … and say it is with “wonder and astonishment” that Bob survived his injuries. But those wonders and astonishments are still natural.

Let’s look up a short definition of “natural” from Merriam-Webster:

“Having a physical or real existence as contrasted with one that is spiritual, intellectual, or fictitious , of, relating to, or operating in the physical as opposed to the spiritual world"

My whole point here is that if it can happen here in a physical - natural world, then it cannot be “supernatural.” What happens in the realm of the body of nature - the physical - is natural. It involves the nature of the beast. What happens “supernaturally” happen in the realm of Spirit - spiritual/supernatural. It involves the Spirit of the beast. A Metaphysical event ... Beyond the natural-physical.

So the next time you witness a “miraculous” event … remember that the meaning of this word is “that which causes wonder and astonishment, being extraordinary in itself and amazing or inexplicable by normal standards.” But still … natural. Do not shortchange the powers of mankind to perform beyond the normal. To be able to raise the non-existent ceiling of endless abilities.

We’ve all heard the story of the Mother lifting a farm tractor off of her son after he got trapped under it. Was this a miracle? No … It was astonishing, extraordinary, and amazing … but still not a miracle. It did not break the immutable Universal Laws of the Universe that can never be broken … not even by God-Source itself.

Flying in an airplane to someone from the 1400’s would be a miracle to them. But it isn’t. We learned physics, jet propulsion, aerodynamics, lift, speed, weight ratios, and voila … we fly airplanes all day everyday. Now, the next time you crack an egg for breakfast, and a pony comes out … let’s talk. 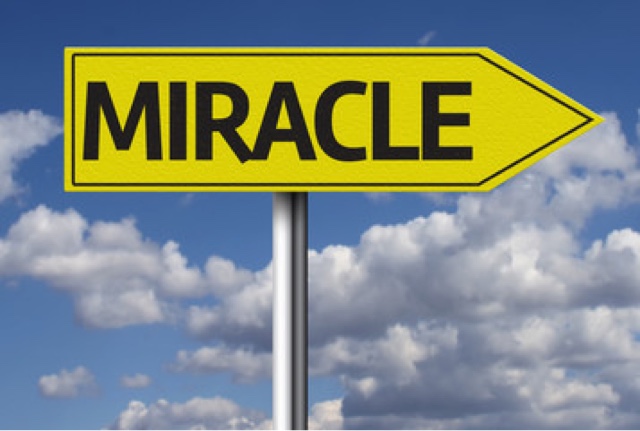