Astrotheology And The Root of All World Religions

Astrotheology And The Root of All World Religions
The Astrotheology premise is that all religions are derived from astrological/astronomical/seasonal symbolism, all of which have their roots in early shamanistic fertility, sky worshiping.
The roots of Astrology can be traced back to the Sumerians in the ancient city of Babylon between 4000 and 125 B.C. This region was once known as Mesopotamia. The southern part was called Babylonia, and the northern part was called Assyria. Ancient Sumerian culture is the cradle of our civilization.
Astrology actually has many diverse roots. It is considered a legitimate science, based on it's structural makeup, it's long and complex history and it's correlation to other acknowledged sciences.
The disipline of astrology is grounded in other well established and professional recognised sciences such as astronomy and sociology.
Directly tying science to astrology are particulars such as the origin of the word "Planet" which comes from the Greek astrological phrase "Wanderers of the Heavens."
The Sumerians were mostly shepherds and farmers who did a lot of sky gazing, and they soon noticed a connection between the heavenly cycles and the cycles of growth in plants and food.
They're lack of scientific understanding in those primitive times, inspired these ancient people to construct fantastic stories as a way of elucidating the unexplainable phenomena of their surroundings. These stories were then passed on from continent to continent and generation to generation.
Historians estimate that astrology dates back more than five thousand years, to the time when the Sumerians used temples as observatories to decipher their celestial observations, and heavenly meanings.
For centuries they empirically tried to correlate these phenomena with human experience, thier astrological law was passed directly to the Babylonians, a culture which explicitly addressed astrology in their writings to the twelve signs of the Zodiac.
Modern Western astrology and even Hindu astrology is based on the old Babylonian system which was taken over by the Greeks and the Romans and eventually made it's way to Europe and then the Americas.
The Chinese used symbols from their own culture to develop their own unique system of astrology, as did the Mayans. The Mayans were especially well versed in advanced mathamatics and astronomy, which contributed to the depths of their speculations.
Astrology has been described as:
"The science of astronomy applied to human affairs"
Some historians say astrology was the first science, due to it's detailed observations and mathamatical foundations.
The science of astrology is deeply rooted in the history of mankind. Ancient History with the greatest story ever told, through many religions, is based on the story of the Zodiac.
Astrology, and religious stories, are based on the foundations, and personifications from the zodiac ... entirely based on Astro-theology and Astronomy.
Ancient Science developed from the sun. The year was devided into twelve equal parts, just as now we devide the year into twelve months.
The suns helpers (Disciples) are the twelve months, and the twelve signs of the zodiac, or constellations through which the sun must pass. Thus most religious stories were based on the movements of the sun through the heavens of ancient times ... meaning the planets and stars.
An astrotheologial development that can be found thoughout the planet, because the sun and the zodiac signs can be observed around the globe.
Evolving from ancient times these myths, and fables, are merely a mythological formula revolving around the movement of the sun through what Sumerians thought were the heavens.
Such mystery and awe surrounds the Sumerian Culture. Ancient Sumerians possessed extensive knowledge of the solar system without telescopes. You can read much more about this era in the recently discovered Clay Tablets.
You will also find interesting myth and legend of the Sumerians and the people (Gods) who came from the skies ... the Anunnaki. Too much to get into in this post. Question everything my friends ... all things began at one point of origin.
Just a thought ...
~Justin Taylor, ORDM., OCP., DM. 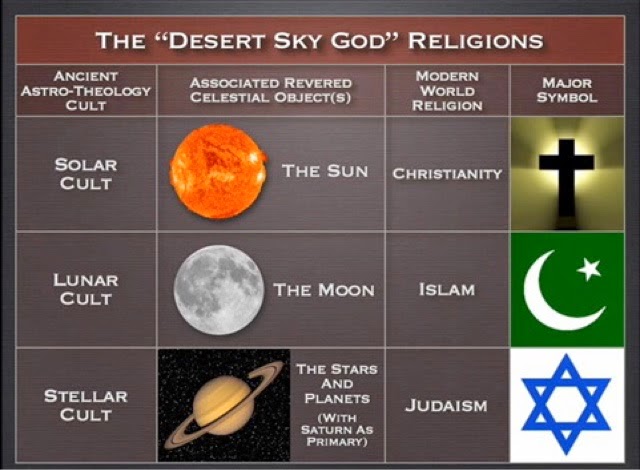