Why Are We Here?

Why Are We Here?
Religions have ruled mankind all over the world for centuries. Belief systems that place some greater construct as an originator and creator of ourselves and nature around us. Even Atheism, itself a belief system and religion, proclaims the religion of nothingness and an accidental universe.
However, none of these belief systems at their root necessarily hold viable answers as to how we really got here. The issue is that we are indeed here, there is something ... not nothing. All are faced with the same problem and issue of explaining how we got here, how and why do we exist? The "how" however ... has serious holes in most belief systems.
Judaism, Islam, Christianity, and other sects and branches of religion, claim that a supernatural being they call "God" made us and the universe around us. This, however then leaves us with the problem of “Who made God?” This could go round and round like "Groundhog Day" with Bill Murray. If there was a higher god that made God, then who made THAT god? It is endless loop.
Darwinism suggests that order comes out of chaos, requiring a faith perhaps even more frivolous than what is required by mainstream religion. Darwinism, which claims nature evolved out of a primordial soup - like other religions - also struggles with the concept of “Who made the soup?”
Everyone seems to want to impose their belief system and ideals on everyone else. They say God provides for everything ... however ... these same folks who say they know God pass 'round the collection plate or ask for funds to support their religious system. Clearly, if God was as they believe, then couldn't he just whip up all the funds needed to pay the bills ... especially if it is in fact ... the House of God.
Even the most ancient writings and stories from the Sumerian texts that suggest mankind was engineered by extraterrestrials - the Anunnaki - to mine gold, but the same problem is left unanswered. Therefore, if humans were engineered by the Anunnaki,  "who made the Anunnaki?" The problem is circular.
Order cannot come from chaos in this way. It has to be engineered. This is our job. This is what we do. We are commissioned to bring about order from chaos ... to tame the unbridled fury of nature ... to take lightning from the skies and provide electricity for our lives. We progress ... we evolve and involve by this progress and process.
If we were, for example, to park a pick up truck and a sports car in a garage and leave them there for a billion or more years ... a high-performance SUV is not going to drive out. All you will have is a pile of rust and rotten plastic. Suggesting a super car would drive out of the garage is preposterous and ridiculous. However, the tiniest little bug running around is vastly more complex and intricate a design than any SUV, pick up truck, sports car, or anything else that humans have engineered.
The answer to all of this is Life. Life itself ... in the human form ... has demonstrated the ability to overcome the forces of nature. The SUV drives out of the garage under the influence of the creative force of human engineers. Life in humans creates the energy and order out of chaos.
Understand that we are the essence of life and love, manifest as souls in time and space within the physical continuum of the universe. We realize that our essence, our soul, actually also exists outside of time, space and this physical universe. We are built out of love, love is the creative force within us  ... everything that we are, we are thus in the old perspective ... the collective essence of what is called ‘God’.
Once, nothing existed from a physical universe’s perspective, not even time or space. Love formed because love simply is, it exists outside of time and space, a creative force that produced life. Life thus ... is love. Life overcame enthalpy and entropy and created a universe in time and space in which to play, to live, to love and enjoy ... to simply be ... beings. Out of the darkness the light of life shone overcoming the void and giving bloom to the universe cutting out darkness.
Like seeds, we can be full of love and grow as beings of light, or we can be evil and revert back into nothingness and a dark meaningless void. Our walk in life determines how our soul grows and evolves. It’s the walk that counts and determines the direction of the soul that inhabits our body ... the real you. This means you use and choose what determines the very essence of the soul that is you.
Live a life of light and love, shine on all fellow beings, all of nature and the universe around you and bee civilized. Oppose evil and cast out all forms of greed, and self-centeredness.  Remember, the life of the universe is not only built on love ... it expands on love. Celebrate the light of life ... love. Spread some of that.
~Justin Taylor, ORDM., OCP., DM. 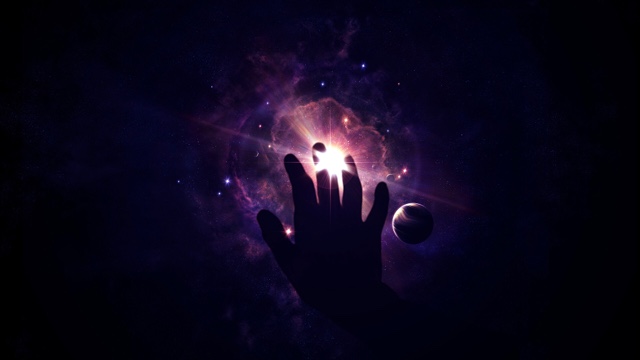